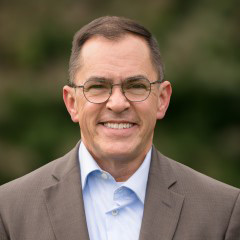 Alan was born and raised in Annapolis, Maryland. He was saved in the summer of 1978 as a Seaman Recruit in the U.S. Navy. After graduating from the U.S. Naval Academy in 1983, he was commissioned an Ensign in the Navy. After serving on active duty for 10 years, Alan was called to vocational ministry. Transferring to the Naval Reserve, Alan enrolled as a student at the Master’s Seminary and graduated in 1996 with a Master of Divinity degree.

Following graduation from seminary I served as the Senior Pastor of the Buena Park Bible Church in Orange County, California. There I met and and married the former Brooke Johnson of Yorba Linda, California. Having served at Buena Park for 3-1/2 years, I was then called back to the Navy to serve as a Chaplain – a capacity in which I served for sixteen years. My naval service took me to Newport, Rhode Island; Rota, Spain; to locations throughout the Mediterranean; to Hawaii, Washington state, and the San Diego area; and also included two combat deployments in Iraq.

I retired from the Navy in 2015. In 2014, I was called to serve as the Associate Pastor of Tri-City Bible Church in Vista, California where I ministered for 6-1/2 years until the Lord called me to be the Senior Pastor of Bethany Community Fellowship in the summer of 2021. My wife, Brooke, and I have been married since 1997 and have five wonderful children.

God’s Word In My Life

A verse that continues to be of great encouragement to me both in my personal walk with the Lord and in my ministry is Philippians 1:6… And I am sure of this, that he who began a good work in you will bring it to completion at the day of Christ Jesus. This verse speaks of the work the Lord does in drawing each of us, His chosen ones, to Himself at the moment of our salvation. And then, from the moment of salvation, we begin the process of progressive sanctification, becoming more like Christ, the Lord’s work in each of us. And finally, there is our glorification that will take place when He returns. As believers, we are secure in this knowledge.